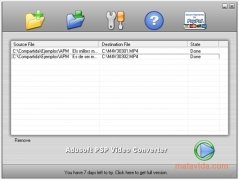 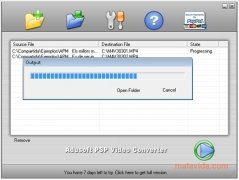 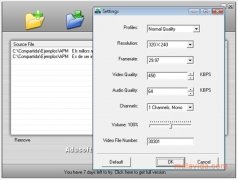 One of the most popular devices of the last few years is the PSP video game console. The portable gadget by Sony is a really powerful machine in its sector, and it has been a total success due to the fact that it is practically a portable PlayStation 2. But, on top of this, we also find multimedia options among its functions. Displaying photographs and playing videos are things that the PSP is prepared for, and it will do this with even more quality if we convert the videos with an application like Adusoft PSP Video Converter.

Make your videos compatible with PSP

This software is really simple, with a clear interface and big buttons with just enough functions to be able to convert video from AVI, MPG, MPEG, ASF, WMV, MOV, 3GP, AMR, FLV, FLIC, SWF,... to a format based on MP4 compatible with the PSP.

The main function of the conversion by Adusoft PSP Video Convert is mainly focused on changing the resolution of the videos to adjust them to that of the PSP, because this way it manages to reduce the size of the file with the intention of saving space on the Memory Stick. This is an important detail because the PSP's resolution is 480x272 at the maximum, so viewing a video coded in 800x600 means we would be using a lot of space on the memory for no reason.