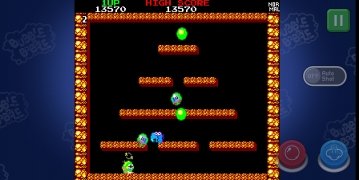 If you don't know what Bubble Bobble is, maybe it's because you're too young. It's one of the great classics of the 80s and 90s, a game that triumphed on every platform it was released on and appeared in all arcades around the planet.

The aim of the game is to handle our dragon Bubblun and throw bubbles where we can catch our enemies to kill them by blowing them up. After 100 levels we reach the final monster, jumping over the structures that made the bubbles and over the bubbles themselves. Of progressive difficulty and as addictive as it is fun, at times it could become unrealistically tricky.

This remake reproduces the original game in an authentic way, with the exception that we won't be able to play with two players like in the original Taito. But otherwise, it's perfect for nostalgic people and for anyone who wants to enjoy a good platform game.

These are its main functions and features:

The game also features a very simple game system, reduced to the minimum as in the original: move with your left hand and jump and shoot with your right.

Laura Stutt
mobirix
Over a year ago
This year
38.1 MB