Bullet Party 2 for Android devices is an action-pack first-person shooting game similar to Counter-Strike, one of the first multiplayer shooters around 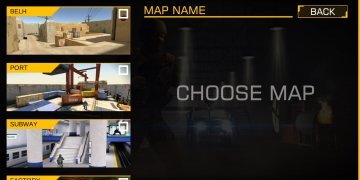 Counter-Strike was one of the first high-quality multiplayer shooters, fact that helped to win over a legion of fans from all over the world and, therefore, all sorts of tributes also appeared, as is the case with this Bullet Party 2.

An action game that reminds us of Counter-Strike

It's an online FPS in which two teams of players will face up to each other on different scenarios. It has been designed with eye-catching graphics and a simple control system, which makes it a rather decent option if you're looking for a true action game for Android, without having to worry about how to make your character evolve and all that nonsense.

These are some of the main features of this second part of Bullet Party: