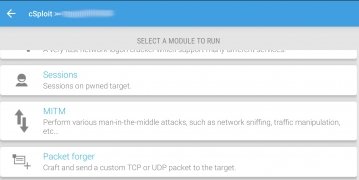 The most advanced security kit for Android

Even though the developers of this application say that it is for auditing security we don't imagine for a second that you are going to use cSploit to check your network security. Anyway, you should know that it provides a full tool kit that can be used to test the consistency of a WiFi network and of all of the devices connected to it.

Main features and functions of cSploit

These are the main features offered by this tool which is used for breaking into other devices:

If you download it, don't freak out when a billion anti-virus flags pop up marking it as potentially dangerous: applications that are used for this kind of things, to audit a network's security, are usually flagged as malicious by a wide range of anti-malware programs, but downloading and installing it doesn't mean you will be infected by malware.