Dingo is a game that combines dice with Bingo. Download Dingo free and throw dice to score out all the numbers on the screen and receive more points 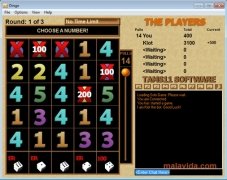 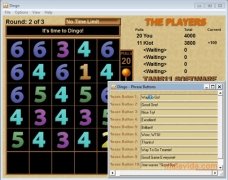 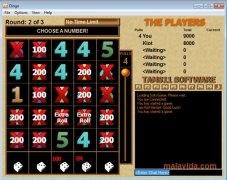 Throw the dice and manage to score out all the numbers

Dingo is an original mix of various classic games: dice and bingo. Just like slot machines, you will have to activate the lever to make the dice move. Once the numbers appear you will have to score out these numbers from the corresponding column. And each time that you score out the numbers from a column or a row, you will obtain extra points. Compete against the computer to manage to see who receives more points.

The screen of Dingo is divided into rows and columns with numbers. The bottom row is the space for the dice. When you activate the side lever the dice will start to move and the numbers will appear. You have to check if you have the number that has appeared in the corresponding column, and if so score it out. In Dingo you will be able to receive extra points depending on the number that you score because some of the numbers receive a special bonus.

If you manage to complete a line, both vertically, horizontally, as we as diagonally, you will also receive extra points. The objective of the game is to complete the full board while scoring as many points as possible to beat the computer.