FFHardener is a tool to really increase the security of Firefox . Download FFHardener free to solve the most important security vulnerabilities of Firefox 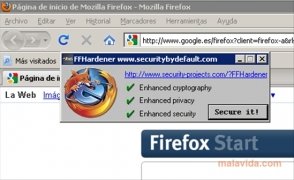 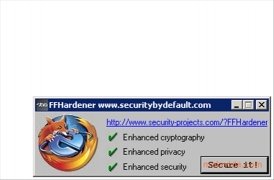 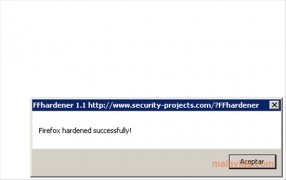 Any program with a lot of popularity lead to "the bad guys" paying more attention to it when it comes to plotting their misdeeds, that is why Firefox receives more attacks each day. Even though no software is error-free, the truth is that some parts are more prone to generating security holes than others, and since the vulnerable parts of Firefox are well known, FFHardener tries to offer some order and conceal the problems that the browser by Mozilla may have.

Take security to the next level in Firefox

Once FFHardener has been downloaded, its functioning depends simply on pressing the only button that is shown in its interface, and that will prop up the weak points of Firefox. Basically, its action lines consist of making sure that no R4 algorithm is used in the SSL connections because it is an insecure encryption, furthermore it forces the use of 64 or 128-bit algorithms.

On the other hand, it prevents that some JavaScript functions are launched because they are potentially harmful and the hide the toolbar function is deactivated. What's more, to increase privacy it makes sure of deleting all the browsing history as well as the stored pages cache.

Scott McLure
Security Projects
Over a year ago
More than a year ago
1.1 MB