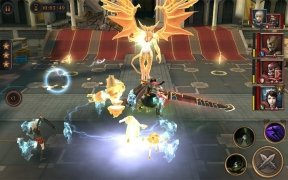 If the Final Fantasy saga has been amongst us for so many years that's because of its high quality. Like all video game franchises with loads of games, it has had its highs and lows but always with cool proposals. Now we can try out this Final Fantasy Awakening for Android, an adventure set in the universe of Final Fantasy Type-0 and the sequels to FFXIII.

The first 3D Final Fantasy ARPG has finally arrived and comes along with the creation of the world.

Although there are loads of games of this franchise for Android, this one is slightly different. Mainly because it's an ARPG (action role-playing game) that goes beyond its classic JRPG (Japanese role-playing game) nature. And apart from the story mode, it also comes along with a touch of MMORPG (massively multiplayer online role-playing game) as we can play in teams of nine versus nine players in a separate stadium.

A wonderful visual show, with over 200 CGs.

Since it's a real-time action game, you can move your character around with the D-pad and fight with virtual buttons, forgetting about the classic turn-based battles, being able to kick ass with total freedom. And at the end of the day, it's a final fantasy game so you can invoke well-known creatures and create and modify items to improve your equipment and inventory.

The 3D graphics are really cool, with a wide range of CGs for you to enjoy. And although Square Enix isn't behind the production it has authorized its development. So don't hesitate to download its APK file right now.