4.6.3 Gtv Live Sports is an application featuring cricket and soccer scores and which also allows users to follow live matches from these sports' leagues
9/10 (6 Votes)
Download 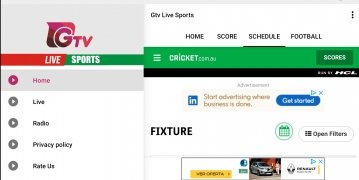 In Asian countries, like India and Pakistan, the king of sports is unarguably cricket, although soccer is gaining ground. Gtv Live Sports is an application for fans of these sports and thanks to which they will be able to watch the world's top competitions for free.

The application offers its users a menu featuring cricket and soccer matches involving local teams, teams from other countries, and also national teams. This means that users can watch the top cricket matches from India and Pakistan as well as matches from the best soccer championships and tournaments in Spain, England, Italy, and the matches played in European tournaments.

The match menu comes up a few minutes before any of the matches that are going to be broadcast get underway. However, you should know that these apps are not always stable and it is possible that when the moment arrives to watch the umpteenth match of the century in a single season, the link doesn't work. If that happens, you will still be able to follow the live scores.

Everything from soccer to other sports in Kodi