Hamachi is a quality tool to communicate various computers with each other. Download Hamachi for free and create a local computer network on the Internet 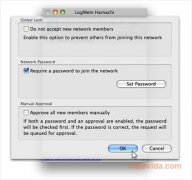 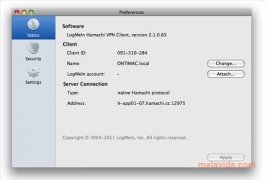 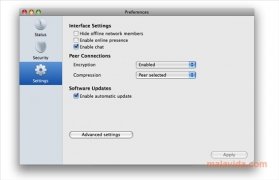 Hamachi is a specific version for Mac OS X of the renowned LogMeIn software, with which we can create a virtual local network by means of the Internet, which will allow us to perform many tasks in a very easy way.

Once Hamachi is installed, its configuration will be halfway between the program's web and the assistant that we'll be shown the first time we launch it. Thus, in a few minutes, we'll be able to have a virtual local network that is fully functional between our computers.

Create your own LAN

Since it's compatible with PC and Mac, the truth is that Hamachi is a very good solution to share files, printers and even to play games that only allow you to play multiplayer on a local network via the Internet.

All communications between computers are encrypted, thus transferring sensitive information won't be a problem at all. The VPN that Hamachi provides is really efficient, to such an extent that it can be used to configure servers in such a way that they will think that they are on the same local network.

How it works is totally transparent for the user once installed, and the quality of its connection is so high that all we can do is advise you to use it if you need to connect two computers.

Hamachi PC 2.2.0.633
Other languages
We use our own and third-party cookies for advertising, session, analytic, and social network purposes. Any action other than blocking them or the express request of the service associated to the cookie in question, involves providing your consent to their use. Check our Privacy Policy.