Powerup the Jump List function capacity on Windows 7. Download Jumplist Launcher for free and you will be able to create and manages lists on Windows 7 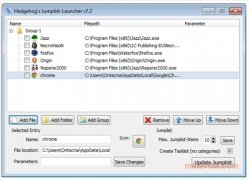 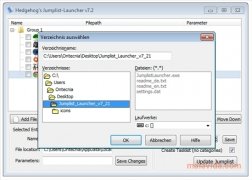 One of the most interesting innovations of Windows 7 are the Jump Lists, that are emerging windows that appear each time that we select the icon of an active program in the taskbar with the right button.

In the Jump Lists we will see a list of activities and documents that are used most with that application, in such a way that by acting on each one of these items we will access them quicker.

Manage your jump lists on Windows 7

To make things a bit clearer, the Jump Lists could be defined like a Startup menu for each application that we have installed on Windows, with its actions and most used documents.

Even though it is relatively simple to create and manage Jump Lists in Windows 7, Jumplist Launcher makes the mechanism even more simple.

With this program, we will be able to create Jump Lists of up to 60 programs or files by the simple method of dragging and dropping, join various in the same group, assign an icon to them and many more options.

A simple tool that makes the most of a small feature of Windows 7 to contribute to making it one of the best operating systems that Microsoft has ever launched.