5.6 Capture the screen of your PC by downloading Kahlown. You will be able to take screenshots and record video in spy mode to monitor its activity with Kahlown
8/10 (5 Votes)
Download 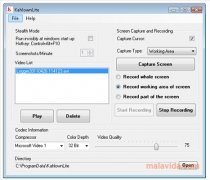 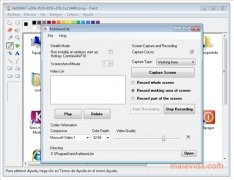 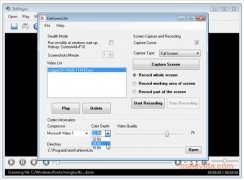 There are multiple tools to carry out screen captures. Nevertheless, Kahlown has been conceived to act in spy mode, in such a way that you will always have control of the activity that takes place on your PC at all times without anybody finding out, which is very handy to monitor how other people use it, like for example your children.

Keep an eye on how your computer is used

Kahlown can take common screen captures or record what is happening without letting the user know. These video files can be saved as AVI or WMV and will be available on a list in the application when you launch it as an administrator. It is possible to record on fullscreen as well as a specific section, as well as to define certain details about the resulting file, like the color bit depth or the video quality.

The tool performs hidden in the background to avoid being discovered. For example, it isn't visible from the taskbar or as a process in the task manager. You will only be able to access it using the hotkey defined for this purpose (Control+ALT+F10).

Record videos of your screen's activity. Take screen captures. After downloading Kahlown for free you will be able to make sure that nobody uses the computer to access contents that aren't advisable for their age and that they use it incorrectly.

Antony Peel
LeSoftRejion
Over a year ago
More than a year ago
13.4 MB