KeeFarce is a tool that hides itself on your computer to steal the passwords that you store on KeePass, who has already warned its users all about it 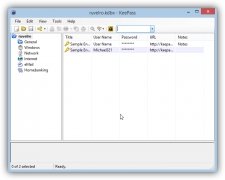 KeePass is one of the most popular and recommendable password storage applications around. But, would you still use it if they told you that you can have all your passwords stolen? Because that's exactly what KeeFarce does.

Can they really steal my KeePass passwords?

Yes, they can, thanks to a decryption tool that has to be installed on your computer... and that doesn't mean that you'll install it yourself, but an intruder might have done so for you. Once it detects that the KeePass database is unprotected, it copies all the passwords to a file.

We have to admit that this tool is quite scary.

The fact is that KeePass itself has warned its users about the potential danger that involves KeeFarce, although it has also played down the worries of its users, stating that the program uses a so-called memory protection process that encrypts the main passwords stored in memory, avoiding these kinds of attacks.