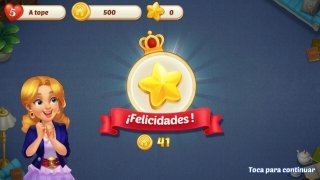 So many match 3 puzzle games have appeared over the years on Android and iPhone due to the success of Candy Crush that they now need some kind of plot or storyline to stand out from the rest of titles of the same nature.

You might not like so much fuss because, at the end of the day, the plot can slow down the gameplay, but as we can't have everything just as we like it, here comes Matchington Mansion.

Furthermore, throughout the game, you'll have to interact with different characters, such as your friend Tiffany the decorator or Rex who wants to get hold of your new property. There are also other situations in which you'll have to deal with your neighbors or even spy on them... so, it might be too much trouble just for a simple match 3 game.

These are some of the features you'll come across:

Help Dr. Mario to wipe out al the viruses