Remove the viruses that your Messenger has with MSNCleaner. Eliminate viruses and malware from your messenger client by downloading MSNCleaner for free 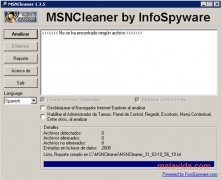 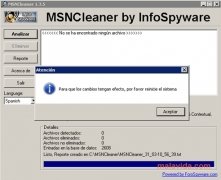 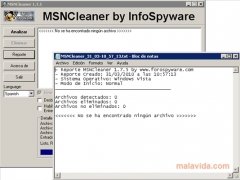 The popularity reached by Messenger to communicate between friends has caused that many viruses and malware program creators focus on this succulent distribution network, but MSNCleaner will get rid of them.

Keep your Messenger clean and virus-free

How many times have we had to suffer a friend that as soon as he/she connects, he/she sends us what is supposed to be a set of photos from the last time that we visited the beach? Photos that are actually nothing else than the virus sending itself. MSNCleaner searches your computer for this kind of virus to disinfect it and avoid that they propagate.

Furthermore, as many viruses block part of the system, MSNCleaner unblocks Regedit, the task manager, deletes the temporary files, restores some Windows and Internet Explorer configurations, restores the HOSTS file, as well as having a useful backup system available.

How it works is very simple, once we install MSNCleaner it will only be necessary to reboot the system in error-free mode and launch the analysis. Thus we'll make sure that we clean all the viruses from the messaging client.