MyUnity is a small application that will allow you to modify several aspects of the new Ubuntu desktop environment, Unity. Download MyUnity now for free 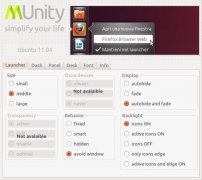 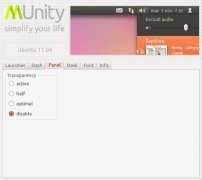 With the launching of Ubuntu 11.10 (Oneiric Ocelot), the new minimalist desktop environment, Unity, also appeared as the main user environment, having first been launched as part of the netbook version of Ubuntu 10.10. And to modify some of the aspects of this new user environment you can use MyUnity.

Customize Unity as you wish

The idea behind the development of MyUnity is to allow the user to customize each little detail of Unity from a single user interface.

Even though the project is still in clear development stage, MyUnity already allows you to:

And it already shows that in a near future it will also allow you to modify the transparency and the possibility to show the devices that are connected.

Furthermore, MyUnity will also allow you to modify the panel, the main desktop and the fonts that are used. And we are sure these won't be the only things that it will allow you to do.

Therefore, if you like the new Ubuntu user environment, but you would like to have the possibility to customize it easily, MyUnity is the application that you are looking for.