Pineapple House transforms Minecraft into Bikini Bottom, the SpongeBob world featuring all kinds of maps, skins, and servers where we can explore and build 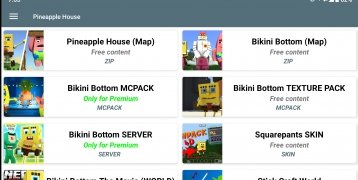 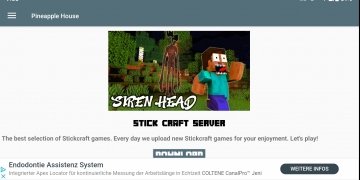 One of the keys to the success of Minecraft is to be found in its capacity to be customized and modified using MODs that allow users to vary the game surroundings and play in picturesque settings, such as Bikini Bottom.

Pineapple House is a MOD for Minecraft that allows us to play this building and adventure game in surroundings that resemble the world created in the SpongeBob cartoons. This means we will be able to download skins from the characters from the TV show, different maps, and servers to connect to in order to enjoy matches with other users in the pixelated version of Bikini Bottom. You will be able to play as Calamardo, SpongeBob, or Patrick, have Gary as a pet and visit Mr. Krab's restaurant, among other things.

As for the rest, as you know, the Minecraft mechanic doesn't change. You will be able to build as you please and explore a vast world totally freely. We like it because anything involving SpongeBob is alright by us.