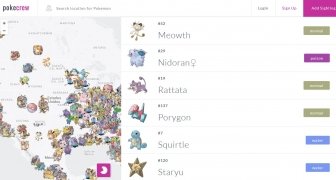 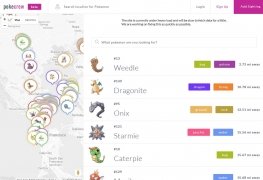 Well, what can we say about f***ing Pokémon GO after writing God knows how many reviews. You really don't know what to explain: stuff about augmented reality to see Pokémons in the real world on your Android's screen, what creatures you can find in each country of the world, all the cheats and tutorials that you guys are always searching for to be able to have a bl***dy awesome pokédex to leave to those kids you're never going to have...

So when you've got to write something about PokeCrew you just feel like jumping out the window. But, don't worry, we're professionals and we're not going anywhere without telling you what it's all about.

Well, it's basically a map on which Pokémon hunters from all over the world can indicate different locations where they've found these creatures. Regarding other maps, like FastPokeMap, it has the advantage of not connecting to Niantic's application, so it doesn't know whether you're using it or not and doesn't have a reason to kick you out.

On the contrary, you might be getting fooled by other users who have put an Articuno wherever they want. Believe, if I had time and interest I would definitely say I've found one of these really difficult Pokémons in places like Pyongyang, Mosul or Grimsby.

No risk of being banned but you might be fooled: you can't have it all.

All in all, if you want to find Pokémons in New York, Chicago, Cleveland or LA, just download the APK of this application to your Android smartphone.

Pokémon GO iPhone 1.189.0
Other languages
We use our own and third-party cookies for advertising, session, analytic, and social network purposes. Any action other than blocking them or the express request of the service associated to the cookie in question, involves providing your consent to their use. Check our Privacy Policy.