2.4.2.0 If you want to protect your PC and files against possible ransomware attacks, download RansomFree, capable of detecting and removing 99% of malware strains
9/10 (5 Votes)
Download 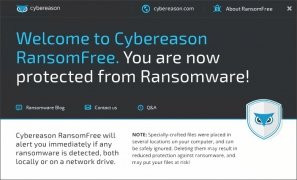 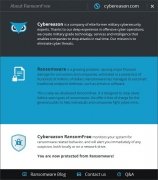 Every year, hundreds of thousands of personal and professional computers are affected by some kind of malware or virus, causing expensive losses to the victims. That's why it's always recommendable to have some kind of security suite or antivirus installed on our PC, but for certain kinds of malware, these programs aren't very efficient. That's the case of ransomware, which requires drastic solutions such as RansomFree, the security software that promises to protect us against this problem.

But, what is ransomware?

Among all the different kinds of malware that can infect your PC, ransomware is one of the most recent and problematic types, with different examples such as Locky, Cryptolocker, Odin or Zepto, among many others. It basically installs on your computer and encrypts all the files and documents of a certain folder or hard drive with an unbreakable encryption.

The malware that kidnaps your personal files.

The only way of recovering those files is paying the ransom requested by the program, usually in Bitcoins. Once that amount of money has been paid, the victim is given the decryption key to recover his files, although sometimes he still has to go without them despite fulfilling the kidnapper's demands.

Ransomware: how to avoid it and protect yourself?

Obviously, the best way of avoiding a ransomware infection (and any other malware) is prevention. The typical measures: don't click on suspicious links, don't open email attachments from people you don't know and, of course, make frequent backups of all your important files on external units.

But sometimes we need an extra security layer and that's where this RansomFree comes in, a free program for computers equipped with Windows that, once installed, runs in the background protecting our computer against possible infections.

How does Cybereason RansomFree work?

Its approach is slightly different to a common antivirus. These programs usually detect malicious software by means of definitions or signatures stored in a database with which they compare possible suspects in order to identify new malware strains. And that's no good against ransomware.

Capable of detecting 99% of ransomware variants.

That's why the developers of RansomFree have studied dozens of different ransomware varieties and have detected a behavioral pattern common to them all thanks to which they have been able to create this anti-ransomware. If the program, that's constantly alert in the background, finds any other software with that same behavior, it marks it as suspicious, blocking all its activity and processes. Then, it's the user who finally decides whether the program is trustworthy or if he allows the antimalware to remove it.

Antony Peel
9/10
Cybereason
Over a year ago
More than a year ago
4.4 MB