Reduce the size of the films maintaining their quality with ratDVD. Download ratDVD free and manage DVD images that are smaller and easier to handle 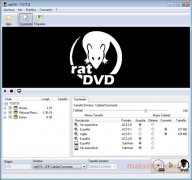 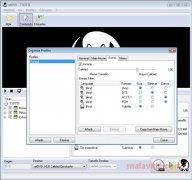 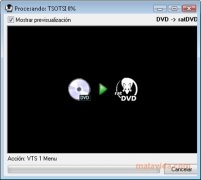 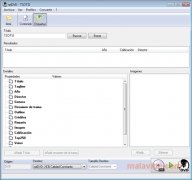 One of the problems that many users have when it comes to generating backups of their DVD collection is the size of the discs, thanks to ratDVD the films that are sold in DVD-9 will no longer need an expensive double layer disc for the backup, ratDVD manages to compress all the files so that they work on a DVD-5.

Unlike what it may seem, ratDVD isn't a converter nor a ripper like those that we are used to, because in general these programs extract the video from a disc and codify it losing quite a lot of quality, as well as changing its format. The truth is that ratDVD generates an identical image but in less space, this means that it includes the disc's menus, several languages or the extras that may be included.

ratDVD also offers us the possibility to decompress the .rat files that it generates eliminating the things that we aren't interested in, like some of the menus or the extras, for example.

One of the advantages of ratDVD is that despite allowing to edit tags and various optional information, its use is relatively simple. Obtain a rather exact copy of the original DVD is relatively simple, because all we will have to do is insert the disc and select the option in the program. We do have to say that this program does take quite a while coding the video.