Did I hear someone say "Chinese virus"? Then download Remove China Apps, the cleaning tool which can remove all and any applications developed in China 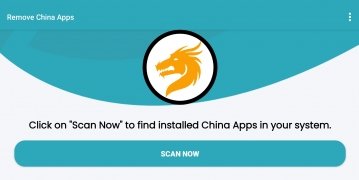 You have to see how bad the Chinese applications are, they are dedicated to capturing your data to serve the damn communist government in Beijing and so they can monitor your every move to end up turning you into a damn red or, failing that, eating your mother and your dog. And not like the apps of companies like Google, Amazon, Facebook, Microsoft, or Apple, which store your data in the country of unicorns and are jealously guarded by an army of Oompa Loompas so that you and only you have access to them.

Delete Chinese apps from your phone

The developers of Remove China Apps must think or want you to think something like this, as this application is only used to delete applications of Chinese origin. The app scans your phone to find those evil applications so you can delete them, having an Android totally free of the eastern threat.

The test, as you can see in the screenshots, we have conducted with a Xiaomi device and has detected two of this manufacturer plus the social network video TikTok. But what little else: it leads you to the option to uninstall apps offered by the operating system itself. Not necessary.

So if, like Trump and other luminaries of his moral and intellectual stature, you feel your life is in danger using Chinese software, you can download this app. But don't forget that after removing all Chinese apps you have to set your phone on fire.

Shay O’Toole
OneTouch AppLabs
Over a year ago
This year
3.8 MB