RetroUI is an application which allows you to use the graphic interface of Windows 7 in Windows 8 without accessing the Metro interface. Download RetroUI 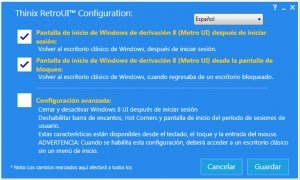 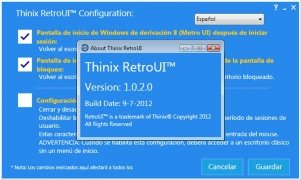 The new Metro interface designed for Windows 8 has managed to captivate many users, but there are still people that prefer to use the Windows 7 graphic interface, which has been left as an option by Microsoft. The only problem is that to access the old interface it is necessary to access the Metro interface first, something which can be avoided thanks to RetroUI.

RetroUI can be configured so that it will automatically close the Metro interface when the user starts a session, in such a way that he/she will immediately access the desktop which people have got so used to working on with Windows 7.

Choose which screen you want to eliminate Metro from

Among the options of RetroUI the user will be able to find a very interesting option for those users that use more than one screen, because it is possible to choose which screen to eliminate the Metro interface from.

On the other hand, RetroUI allows you to fully eliminate all the features of Metro (Charms Bar, Hot Corners, and Metro Switcher) with the only problem of having to waive the start menu.

Download RetroUI to be able to avoid the use of the Windows 8 Metro interface.