save2pc makes it very easy to download YouTube videos to your hard drive. Download save2pc free and you will also be able to change the format of the videos 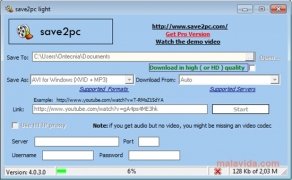 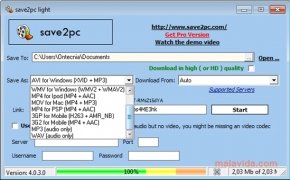 With the popularity of the YouTube video site, the amount of entertaining and really memorable videos that we encounter each day is really large. There are some of these videos that are so good, that some people prefer to download them with save2pc to be able to view them on any device or whenever they want without requiring an Internet connection.

This software makes this task really simple, because by simply indicating the video's URL address, the program detects its size and the way to download it, so a few minutes later we will be able to have a brilliant FLV video. But that isn't all, because save2pc allows us to convert the videos to the most popular formats such as 3GP, AVI, MPEG, WMV, MP4 or MOV, all of them with special optimizations depending on the devices on which they are going to be played, whether a PSP or an iPod.

The download speed is really good, even though some relatively interesting features are only available in the Pro version of the application. Nevertheless, the functions that are included by default are more than enough for the majority of users that only want to save a YouTube video on their computer.