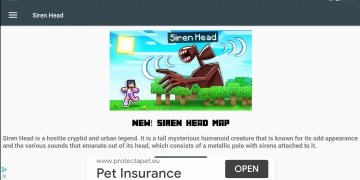 Trevor Henderson is a Canadian artist dedicated to illustration and music, famous among other things for creating horror creatures such as Siren Head. It is a strange creature of great height, hostile and predatory, lurking in the darkness of the woods. The context given by the author places it for the first time in the 1960s in the inhospitable Arizona desert. Among its abilities is the emission of all kinds of sounds at high volumes causing damage to the ears and driving the listener crazy.

Well, Minecraft Pocket Edition players thanks to Siren Head Game for MCPE can incorporate this terrifying creature to their games in the adventure and construction game thanks to a wide collection of maps and skins for the game. A MOD of MCPE that will allow you to live an adventure with this being stalking or even characterize with its appearance the character you are using to play. This will force to incorporate a series of strategies and game modes to the games to deceive and confuse Siren Head.

To do this you simply have to go through the main menu of the app and choose which element you want to install. It is clear that it is necessary to have Minecraft Pocket Edition installed on the device.