Synergy is an application to use several computers with a single mouse and keyboard. Download Synergy free and check how easy it is to use this application 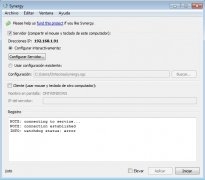 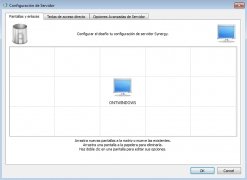 The most useful computer tools are those that make our day to day easier, a fact that makes Synergy an application that has to have an important place within the utility group for those users that have several computers and use them at the same time. This program uses a local network to make it possible to control all the computers with a single keyboard and mouse.

Access several computers with the same mouse and keyboard

How it works is very simple, once installed on all the computers, you can hide all the keyboards and mouses except those that are going to act as main controls. After that, we will indicate where the screens are positioned with regard to the main one. Once everything is configured, when the mouse reaches the edge of the screen of one computer it will pass on to the next, this means if you have two computers and you are using the one on the left, to take control of the right one you will only have to drag the cursor towards it. As if instead of two computers you were working with two screens.

This simple utility saves a lot of time and space, because switching computers is really quick, and all we will need is a keyboard and mouse to control all the computers, without worrying if they use the same operating system or different ones.

Antony Peel
Synergy+ Team
Over a year ago
More than a year ago
14.3 MB

One of the best remote access apps for PC