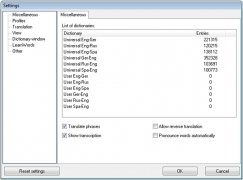 In certain fields of work and when you spend a lot of time browsing the Internet it's rather common to bump into foreign languages, some of the most common being Spanish, German and Russian, and even though each day it is more common for people to have studied foreign languages, it is always a good idea to have access to an application like TranslateIt!.

The translation program has two basic ways of working, it can be used directly from its interface to be able to look up a specific word or it can be activate by means of a keyboard shortcut after simply selecting a word in a text.

TranslateIt! can be very useful, because it allows you to translate a total of four languages, offering translations between:

Download TranslateIt! to know at any moment the meaning of anything you read.

Antony Peel
TranslateIt!
Over a year ago
More than a year ago
23.9 MB