Mac users also need tools to work with RAR files. Expand them and even repair the files that are corrupt once you download UnRarX for free on your computer 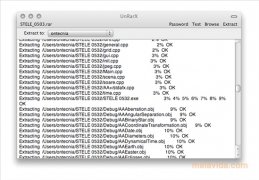 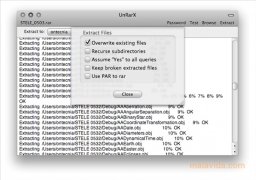 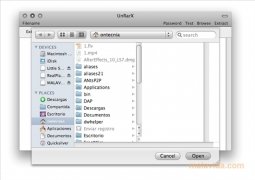 UnRarX is an ideal tool to be used by any Mac user that doesn't want to pay for a commercial file decompressor. Despite the fact that, unlike StuffIt, it doesn't have a graphic interface the program is rather easy to use and, after using it on a couple of occasions, there will be no files that will manage to offer resistance.

Work with RAR files on your Mac

As well as being able to decompress RAR files, the application has a utility with which we'll be able to repair RAR files that are corrupt or incomplete, so as to be able to save as much data as possible, in the case that something we have downloaded from the Internet isn't compressed properly.

To be able to unpack any file you'll only need to drag and drop it on the program's icon, even though those people that know how to use the command terminal will be able to obtain greater control over the full process.

If you still don't have a tool specialized in expanding RAR files, try out unRarX, a simple and totally free tool.

WinRAR Portable (Unplugged) PC 3.9.1.1
Other languages
We use our own and third-party cookies for advertising, session, analytic, and social network purposes. Any action other than blocking them or the express request of the service associated to the cookie in question, involves providing your consent to their use. Check our Privacy Policy.