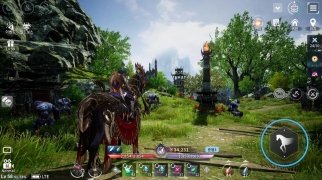 The South Korean video game development studio Nexon has quite a few MMORPGs that have garnered excellent opinions from critics. V4 comes to join these MMORPGs as it is another similar style title in which you can play massive games.

Mass games with up to 300 users at once

Players will find scenarios with up to 300 simultaneous players, large-scale battles, and boss raids. Your survival will depend on how you play your cards, and that includes your ability to form alliances and become powerful enough to defeat the strongest players.

The mechanics of this game are the usual for this type of videogames, where we will find 6 different kinds of characters with unique combat systems and abilities. The game also reinforces the support system among partners, and, therefore, it will be essential to reach agreements with other players in order to advance.

Download V4 now and enjoy a good MMORPG game set in a world of medieval epic fantasy and Asian aesthetics.