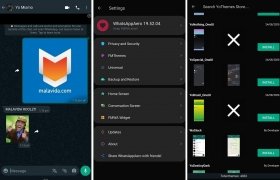 If we take a look at the majority of WhatsApp MODs, we'll see that they're all too similar as they are all usually based on the same developments such as GBWhatsApp. And when they aren't, those developments are often not as good as we'd like them to be. But that's not the case with WhatsApp Aero, a MOD for the chat and instant messaging app that comes along with important visual changes whilst also offering a high-quality client.

For many users, the most original WhatsApp MOD

We'll find functions similar to those of other MODs but with an original aesthetic touch. To start off, the interface has undergone major changes, therefore, it's one of the best options for anyone who wants to get their hands on a different kind of WhatsApp.

These are the main features and functions of this app, which are also similar to those of other developments of the same nature:

If you want to download a WhatsApp version that's different to the official edition and turns out to be extremely flexible when it comes to customizing visual aspects, don't hesitate and download the APK of WAAero right now.