Win8Menu is an application that adds the side menu of Windows 8 on your desktop. Download Win8Menu for free and try this new visual resource of Windows 8 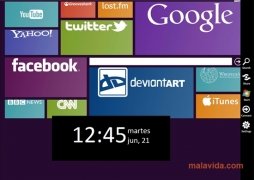 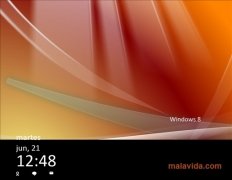 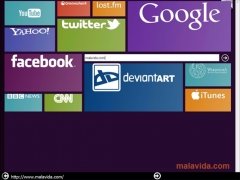 Win8Menu is a simple program with which you can enjoy the side menu of Windows 8 before the new operating system is finally launched. It is very easy to use, and although some functions aren't developed, you'll be able to have an idea of the possibilities that the new Windows 8 interface has to offer.

When you launch the application, a kind of screen block will appear, where you will be able to see a clock and the date. To unblock it you will only have to drag this screen upwards and your desktop will be active once again, but with a new menu.

Win8Menu shows a menu on the right side of the screen, in which you'll see five buttons, even though only two are active. The Start button will activate a Favorites screen with shortcuts to various websites, like Facebook, Google, Twitter, Yahoo!, iTunes or CNN. And the other button that works is Search, which will allow you to perform searches on Bing.

Furthermore, on the left of the desktop there is another bar that will allow you to open the windows that are running, by clicking and dragging towards the center of the screen.

Win8Menu will allow you to get an idea of what you can expect Windows 8 to include when launched.

Use the Windows 7 interface in Windows 8