Download Windows 8 Start Menu Toggle to your PC for free and change the Metro start screen, the task manager or the explorer for the Windows 7 classics 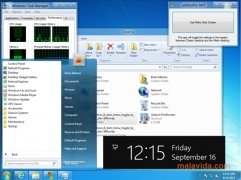 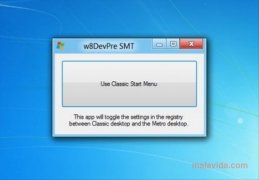 Whoever has tried the new operating system by Microsoft, Windows 8, will have been able to check that the only Start screen available is Metro, the graphical interface of the OS. This screen is always active and there is no way to deactivate it. Unless you have Windows 8 Start Menu Toggle. The file explorer and the task manager have also been modified.

Many users find this new interface confusing and hardly intuitive at all, especially when the operating system is used with computers that don't have touchscreen support. W8DevPre SMT will allow you to transform the interface of Metro into the classic of previous Windows operating systems as well as to use the old file explorer and task manager.

Alternate between the Metro start screen and the classic Start menu.

How to use it

The only thing that you have to do when you install the application is to press the “Use Metro Start Screen” or “Use Classic Start Menu” depending on what you want. The next time you start a session, the interface will change and will look like the old one once again.