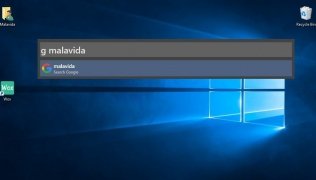 Windows 10 has improved greatly what we had seen up to now on Microsoft's operating system in terms of usability. Together with its file explorer and the Cortana assistant, it's much easier to find programs or documents stored on our PC or to search on the web.

An application launcher for Windows

However, Wox intends to speed app those searches on the Internet offering us a launcher capable of locating files and documents in a much more simple and faster manner. By simply starting to write in the search box it will offer us all the real-time matches it finds on the system.

But that's not its only function because by means of certain commands we can carry out other actions such as using the letter G just before a word to search directly on Google. It also supports plug-ins from other services such as YouTube. In other words, we can also use it as our entry to search for contents on the web.

Additionally, we also have to point out that we can also customize the tool by means of downloading themes.