Zooba is a battle-royale-like MOBA game for Android smartphones and tablets, featuring animals in which we'll have to fight to take control of a zoo 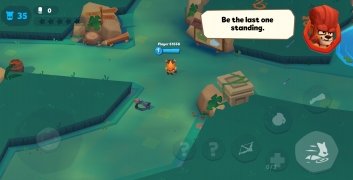 If you're into multiplayer combat games of the likes of Brawl Stars, you can't go without downloading Zooba for Android. Here, the main characters are animals who will fight to become the kings of the zoo.

Here, the gameplay will be very similar to that of a classic MOBA. In other words, we'll have to choose a character and step onto the battlefield where we'll take part in multiplayer combats in which we'll have to do whatever it takes to be the last players standing, just like in titles of the likes of Fortnite.

Nevertheless, what really changes are the settings, as the main characters are animals fighting to take control of a zoo. And, of course, we'll be able to interact with other users to team up in clans, thanks to which, we'll try to master the game.

These are the main features offered: