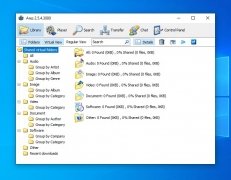 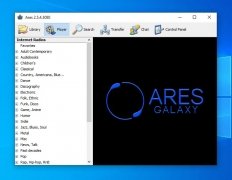 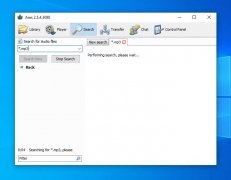 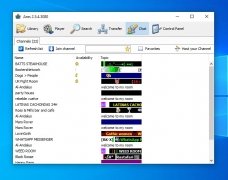 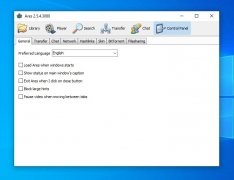 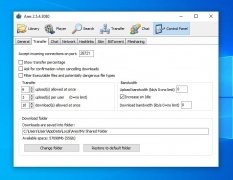 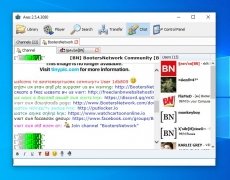 The great alternative to eMule at the beginning of 2000.

It was obviously still a period in which YouTube, despite taking its first steps, was still far from having today's popularity, Spotify was only a crazy futuristic idea and Netflix was still an online video club that sent DVDs by post to its subscribers. Streaming wasn't the in-thing, downloads were. But, surprisingly enough, its still has its loyal users that turn to this software to download video and audio. That's what nostalgia is all about.

The first thing you've got to do is download the Ares Galaxy client offered on this page. The download and installation processes are very fast as the installer only weighs a few Megas. Once installed, a message will ask us if we want to unblock the Windows Firewall, which you'll have to reply to positively.

From there on, just access the Search tab indicated with a magnifying glass and type in the keyword you want to search for. You can search for any kind of file or filter the results by type: video, audio, image, documents, software, etc.

The results, as well as showing the name and size of the file, and other relevant info, also indicate the file status with a star code. The more stars, the better, as they guarantee the quality of the download.

Any file chosen will automatically be added to the Download tab, where you'll be able to view its progress, the download speed and the number of seeds and leechers at any given moment, being able to pause, resume or cancel any download as you wish.

How does Ares work?

Like many other previous download programs, such as Kazaa for instance, this file sharing service uses P2P technology. In other words, it's a network in which there are no fixed servers or clients, but instead, each node is equal, and all of them behave like servers and clients at the same time. In the case of this specific peer-to-peer program, it's very fast because it gives priority to those nodes with lower completed download percentage.

It's not all about downloads

But this program exceeds the functions of a simple download manager for movies, songs, video games or books. It also offers us a tab from which we can also access hundreds of online radio stations, from different countries and with different music genres, as well as several TV channels that broadcast live via streaming: from news channels to thematic sports channels, as well as leisure and entertainment channels. All the latter through an audio and video player built into the application.

If you're an old-school guy or you just want to know how people downloaded things from the Internet when your older brothers were kids, don't hesitate to download this client for Windows.

How to limit simultaneous downloads in Ares

Limiting simultaneous downloads in Ares is a very simple process. The first thing you must do is open the settings panel of the application by clicking on the Control Panel button.

Sharing files with other users in Ares is very easy. First, access the control panel.