1.0.0 Helium Desktop carries out backups of the information of your Android smartphone without needing to root the device. Download Helium Desktop for free
7/10 (64 Votes)
Download 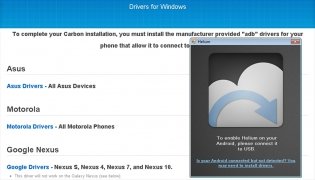 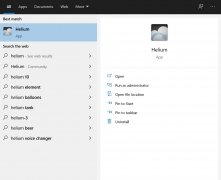 Helium Desktop, previously known as Carbon Desktop, is the solution to carry out backups of the contents of your smartphone. If you have an unrooted Android device, download Helium Desktop for free.

Carry out backups of your Android.

As a complement for Helium for Android, you'll need to install Helium Desktop on your PC. Thus, you'll be able to secure its contents so as to be available in the case of loss or malfunctioning of the device.

How does Helium Desktop work?

To carry out the backup of your smartphone's information, you have to follow the following instructions:

You can now enable the functioning of Helium on your Android device to be able to create backups.

Antony Peel
ClockworkMod
Over a year ago
More than a year ago
17.2 MB

Helium Android 1.1.4.6
Other languages
We use our own and third-party cookies for advertising, session, analytic, and social network purposes. Any action other than blocking them or the express request of the service associated to the cookie in question, involves providing your consent to their use. Check our Privacy Policy.