Download anything you want from the Internet with Kazaa. Kazaa is the king of all P2P download applications and now it include new social network functions 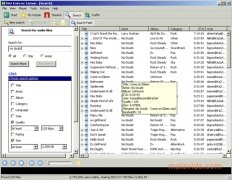 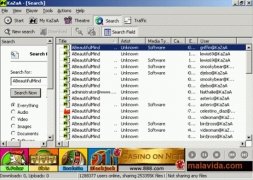 The latest version of one of the classics of P2P networks

Héctor Hernández
September 4, 2009
0 / 10
At the beginning of the P2P technology, when there were neither mules nor torrents, Kazaa stood out as one of the best and most used applications to share music.

Due to the scarce bandwidth of that period, what users did the most was share loose songs. Kazaa excelled as the king of this kind of downloads, displacing the forerunner and ill-fated Napster.

As time went past is started to be used less due to the emergence of eMule and various legal problems, until it has emerged from its ashes as a P2P tool that tries to be social and places its roots in the management and playback of multimedia files.

Kazaa comes with innovating tools like the possibility to import our contacts from Skype and be able to speak and share files with them.

It also includes a dating service that will allow us to speak with that boy or girl with an incredible music collection that is similar to our taste.

And to keep us protected from the threats that are associated to P2P networks, it includes a powerful antivirus that immediately detects if the file that we are downloading is infected.

The past and the future of P2P come together in a solution that comes close to a social network.

Despite being an anti-adware program, it contains adverts.