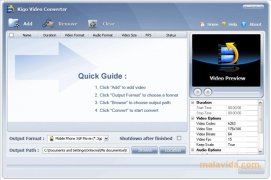 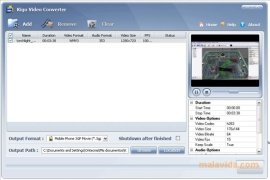 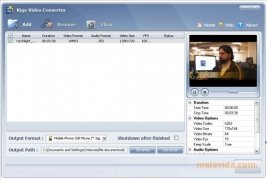 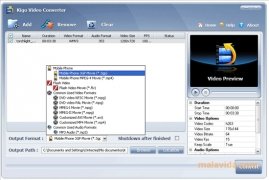 It's more than likely that there are over a hundred different video formats, and that's a real problem when it comes to working with them, and clearly the best thing would be to have all of them in the same format. A problem that is easily solved thanks to Kigo Video Converter Free.

This conversion software supports the following formats: FLV, MPEG1, MPEG2, MP4, 3GP, 3G2, MOV, AVI, M2TS, MPEG TS/TP (for HD video) and M4V, among others. With Kigo Video Converter it's possible to convert any of the support formats from one to another, and since it doesn't leave out any of the import and popular ones, it can probably solve the problem of non-compatible formats. Furthermore, it's capable of working with various audio formats, like MP3 or ACC.

The resulting videos are compatible with many portable devices, like Creative Zen, iRiver PMP, Archos devices, and a large number of mobile phones.

Kigo Video Converter has a nice interface that is very functional, that will allow us to find in a couple of clicks the configuration that we want for our videos, after this, the conversion will take place quickly thanks to the powerful process engine.

Antony Peel
Kigosoft
Over a year ago
This year
18.6 MB