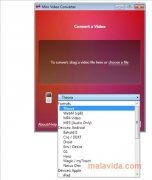 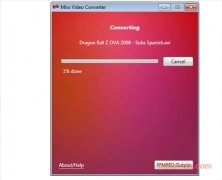 Miro is a renowned video playing software application that is specialized in high definition, and that integrates functions that allow us to download by means of the BitTorrent network or to play in almost any format. Well, now its developers have decided that as well as allowing us to play any video, they are going to make it possible to convert it to the format of our choice.

Miro Video Converter is capable of quickly converting videos AVI, H264, MOV, WMV, Xvid, Theora, MKV and FLV video files to MP4, as well as allowing us to change the audio codec to OGG Theora, the free audio codec. All the latter by means of an interface that is extremely simple.

One of the advantages of Miro Video Converter is that as well as converting all the mentioned formats, it can optimize the video for a large amount of gadgets, among which we'll find telephones with Android, the iPhone, iPod and iPad range, and even portable players and video game consoles like the PSP.

Antony Peel
Participatory Culture Foundation
Over a year ago
More than a year ago
12.9 MB