Bcmon is an app to monitor WiFi networks and decipher passwords. You can control all traffic of your networks and steal your neighbor's Internet connection 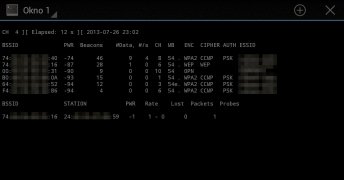 Break into WiFi networks and monitor their traffic

People talk about monitoring networks but they really mean stealing their neighbor's WiFi. Regardless of how you call it, that's the main function of this Bcmon, an application to monitor Internet traffic and break into WiFi networks. Nevertheless, there are two essential requirements to get this application considered one of the best tools to steal Internet connections running.

What do you need to use Bcmon on your phone?

Unlike other applications of this kind, we need to meet a rather unusual requirement: download the APK of Reaver, which we need to install previously, and grant all the permissions demanded. Furthermore, we'll also need a rooted smartphone.

By fulfilling both demands, these are the functions that we can carry out with this application:

Both apps, Bcmon and Reaver, can be downloaded from Malavida in the same ZIP files. Just download it and unzip it on your smartphone.