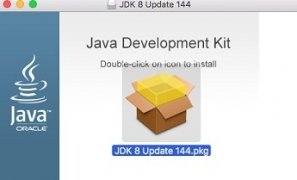 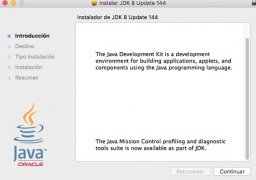 Java has become one of the most popular development languages in the world, mainly due to its portability. You can create applications that, through a specific virtual machine for each operating system, can run on different platforms, whether Mac, Windows PC, Android... It's present on millions of devices around the world, including computers, smartphones, and TV sets.

The Java development environment for Mac

And this Java JDK 8 SE provides the development environment required by any developer to create applications based on Java. The latter offers us a series of services and tools that simplify the development of software. Amongst the latter, the following are considered as the most important ones:

What's the difference between JDK and JRE (Java Runtime Environment)?

On the contrary, JDK or Java Development Kit, as we mentioned above, is the pack of development tools that couldn't work without the JRE.

Java JDK PC SE 14.0.1
Other languages
We use our own and third-party cookies for advertising, session, analytic, and social network purposes. Any action other than blocking them or the express request of the service associated to the cookie in question, involves providing your consent to their use. Check our Privacy Policy.