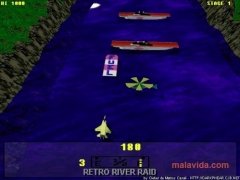 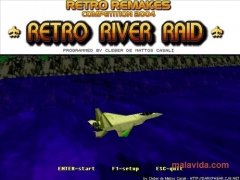 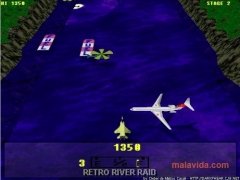 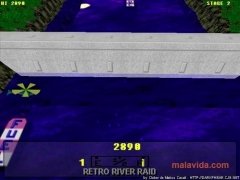 Shoot anything that moves and manage to get as far as possible unhurt, that is going to be your main concern when you get hooked onto Retro River Raid. Because you will be hooked on.

If there is something that this remake of the original 1984 game by Activision has is the same devilish addictiveness. Retro River Raid is a very simple game, but at the same time it's very complicated to master. You are the pilot of a plane that is flying at full throttle along a relatively wide river that is full of aircraft carriers, helicopters and all kinds of fighters that will be obstacles for you. The majority of these vehicles will disappear with a single shot, but you'll have to avoid others. There are also dams that you'll have to demolish and islands to avoid. All this with a very simple control, and a difficulty that is very well adjusted.

Furthermore, you'll have to keep an eye on your fuel and try to get hold of more during your adventures.

This remake of the classic Retro River Raid is a real tribute to that Atari 2600 game that hooked on all those that played it, now redesigned with 3D graphics and a design that is equally effective as well as nostalgic.
Requirements and additional information:
This download requires a ZIP compatible compressor.

Antony Peel
Cleber de Mattos Casali
Over a year ago
More than a year ago
6.9 MB