Sea Battle 2 is the version for Android devices of the most famous battleship board game in the world. Play online games and challenge the app's AI 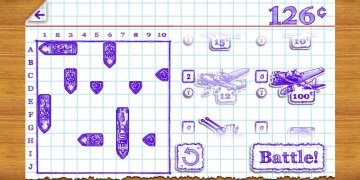 If you've ever tried to download Battleships for Android, this is your game: Sea Battle 2 is a recreation of the famous board game that's all about destroying your rival's fleet of ships. The only is that here we'll be much better equipped as we can use ships, airplanes, submarines, mines, radars...

Wipe out your enemy's armada

You already know how to play. You have to place your ships on the board and implement the most intelligent strategy as possible to destroy your opponent's ships by trying to guess where they are. But one of the most eye-catching aspects of the game is its graphics as they simulate a game played on a paper notebook which puts the game on a really original scenario, also thanks to its great sound effects.

The following are the main features of this Battleships for Android in which you can play online games against rivals from all over the world:

Download the APK right now and play a modern version of one of the most popular board games of all time.