With Workflow you can simplify actions to the extent of automating them. It allows you to establish shortcuts to different combinations of app actions 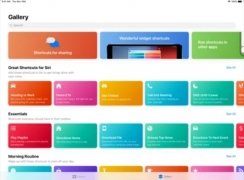 Nowadays, we use our smartphones and tablets for loads of stupid thing, to such an extent that we sometimes forget that these powerful devices are loaded with functions to help us increase our productivity. Functions that can also be increased by using the appropriate mobile applications.

And precisely the application you needed to simplify actions on your different iOS devices has just arrived and is called Workflow: with the latter, you'll be able to automate routines and combine actions on your iPhone, iPad, and Apple Watch. In other words, you can generate automatic workflows following a methodology similar to the IFTTT paradigm.

Faster and simpler actions on iPhone, iPad and Apple Watch.

There are hundreds of actions that we can generate, including those of different applications, such as Maps, Photos, Camera, Safari, AirDrop, Facebook, Twitter, Evernote, iCloud or Dropbox, among many others.

What can you do with Workflow?

You can automate and simplify plenty of different actions thanks to this application. For instance:

You can launch the actions created with Workflow straight from the application itself or from others thanks to its plug-in. A tool with which you'll manage to increase your productivity substantially. Is there a version for Android? Well, not yet and it doesn't look like there will be one anytime soon, so we'll have to cope with the different alternatives available on Google's platform. However, you shouldn't get this tool mixed up with the webapp called WorkFlowy, as their functioning and goals are totally different.