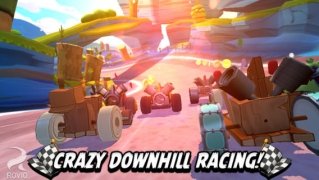 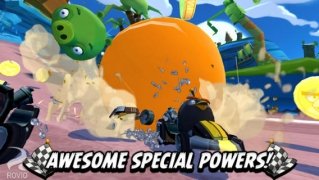 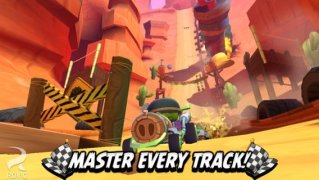 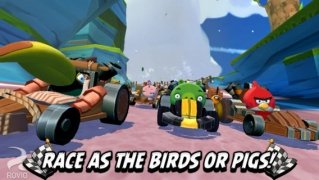 The eternal fight between moody birds and egg-stealing pigs will now take place on a new battlefield, such as the 3D kart races that you will be able to enjoy thanks to Angry Birds Go!.

The battle between pigs and birds now on a racing track

Angry Birds Go! brings us a frenetic kart competition on Piggy Island, where you'll be able to choose birds or pigs in speedy races full of traps and obstacles that you'll have to dodge, as well as gifts and different power-ups with which you can enhance your driving skills. You also have the incentive of being able to improve the technical features of your vehicle and enjoy different game modes so you don't get bored of winning.

The fastest and craziest Angry Birds.

Not very original, but...

Angry Birds Go! takes over from other video game franchises that went into the karting world, such as Mario, Sonic or the game starred by Tux, Linux's mascot. Although it's no longer an original format, as was Angry Birds when it was first launched, it's undeniable that it still is an inexhaustible entertainment formula.

Download Angry Birds Go! and take part in the craziest competition between birds and pigs.

Antony Peel
Rovio Entertainment Ltd.
Over a year ago
More than a year ago
479.8 MB

Angry Birds Go! Android 2.9.1
Other languages
We use our own and third-party cookies for advertising, session, analytic, and social network purposes. Any action other than blocking them or the express request of the service associated to the cookie in question, involves providing your consent to their use. Check our Privacy Policy.