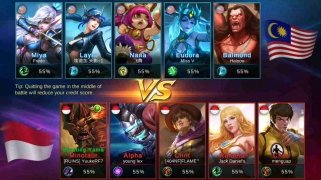 Choki Choki Mobile Legends is an augmented reality card-based game. It works by scanning the game's cards to incorporate them to our deck to be able to use them in battles against the game and other players online.

Face up to other players in online card combats

For such purpose, we'll have to use our photo camera to scan the cards and therefore be able to access all the Choki Choki characters. The online combat system is similar to that of other games seen in the past, such as Magic. In other words, we'll have to bear in mind the attributes of each character such as their resistance, special skills, attacking capacity... We can collect them in order to face up to other users with full guarantees.

It's a very popular game in Malaysia, therefore, you had better be good at speaking Malaysian because that's this title's main language. It's very similar to other titles such as Yu-Gi-Oh! Duel Links, Card Monsters or Deck Heroes: Legacy.