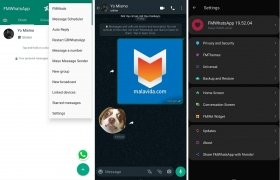 We can't imagine a world without WhatsApp. The absolute king of instant messaging applications has managed to kill SMS and reduced phone calls to less than 50%. However, we can always try to improve it and that's why there are so many different clones that try to add new features to the best chat app in the world.

The name of Fouad Mokdad starts to ring a bell amongst the users of MODs. This developer has already created three different WhatsApp MODs that have reached certain popularity thanks to their privacy improvements, password-protected conversations, the customization of the application or improvements to file transfers. Just what any user of this app could possibly want.

Although WhatsApp is one of the most installed applications on smartphones all over the world, this long list of the improvements implemented by FMWhatsApp - Fouad WhatsApp shows us that the app owned by Facebook is far from perfect. For such reason, this MOD includes all the following features, functions, and modifications:

Just like any other WhatsApp APK MOD, you won't be able to find Fouad Mokdad WhatsApp in the official Google Play Store as it goes against the rules of the Internet giant as it's based on the original source code of the official application. However, that doesn't mean that it's dangerous. Furthermore, its developer states that it has been prepared to avoid bans by the official messaging system.

To try out this version, you only need to download the APK file from Malavida or install it directly from its official website, making sure that on your device you've enabled the option to install apps from Unknown Sources in your Settings. That's the standard operation to download and install apps, games, and tools that can't be found in Google Play.

The WhatsApp without bans

More options to modify the graphical aspect of WhatsApp

Expand your control over your chat conversations

WhatsApp mod that extends the functions of the chat application