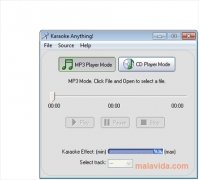 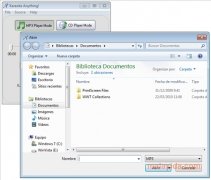 One of the best ways to liven up a party is a Karaoke, singing any well-known song is entertaining both for the person that sings as well as for the person that is seeing the interpretation and with Karaoke Anything! it won't be complicated making any song suitable for Karaoke.

Optimize any song for your karaoke

A Karaoke song has the original music but without the vocals, in such a way that whoever has the guts can sing it. With Karaoke Anything! you'll easily be able to eliminate any song's vocals. The method that it uses is quite simple, an equalizer that is properly calibrated to minimize the frequencies in which the human voice act and sound treatment that they call Karaoke Effect, in this way, the original singer's voice will be eliminated, but not the music.

The interface of Karaoke Anything! allows you to load any MP3 or CD-Audio, with the consequent ease to start enjoying it. Furthermore, its configuration isn't at all complicated so hardly any songs will resist the application.

According to the developer, 75% of the songs are properly recognized, which is a real achievement for this kind of software.

Antony Peel
karaokeanything.com
Over a year ago
More than a year ago
2.6 MB