4.1.7.0 MEGA Privacy is the Windows client of the online storage service developed by Kim Dotcom that intends to guarantee the user's privacy on the cloud
7/10 (7 Votes)
Download 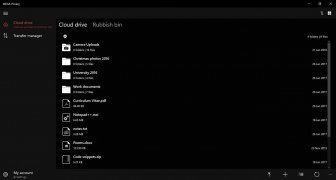 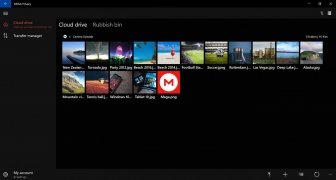 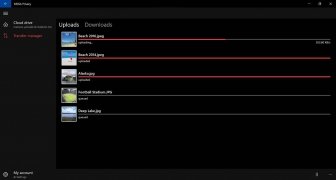 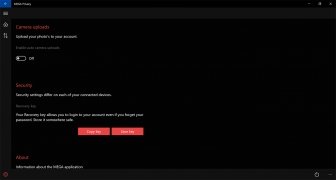 Back in 2012, many users didn't even know who Kim Dotcom was but they soon found at thanks to a huge police operation at his home in New Zealand with cops breaking into his mansion as if they were looking for Bin Laden. But no, they were simply after this guy who had broken several intellectual property rights through his direct download service called Megaupload.

Well, so that's when the story of Mega starts because after spending some time in prison he came out saying that he was going to create the safest and most private cloud storage service of them all... and now this is the Windows client for the service in question, after publishing some time ago the online version and its respective Android and iPhone applications.

Well, that's at least what Dotcom says to differentiate it from Google Drive, Dropbox, and OneDrive, amongst others. Thus, this is MEGA Privacy that offers us the chance to manage our online space to where we can upload all sorts of documents and files which are encrypted to guarantee their privacy.

It comes along with a free version with 50 GB of storage space although the latter can be expanded to paid versions such as PRO LITE, PRO I, PRO II, and PRO III. The price of the latter range between 4.99€ for 200 GB and 29.99€ for 16 TB (per month).

If you've ever accessed MEGA's web version, the interface of the PC client will look familiar because it's almost identical, although adapted to the Windows 10 graphical environment. However, it does expand certain functions such as the possibility to view images and videos uploaded to this service.

But does that mean you can make the most of these features, especially in terms of privacy, to distribute illegal contents? No, of course not, as the company usually replies to all the complaints filed by the real owners and end up canceling your account.

Antony Peel
Mega Limited
Over a year ago
More than a year ago
20.4 MB

Store all your files on the cloud

MEGAsync Mac 4.2.0.0
Other languages
We use our own and third-party cookies for advertising, session, analytic, and social network purposes. Any action other than blocking them or the express request of the service associated to the cookie in question, involves providing your consent to their use. Check our Privacy Policy.