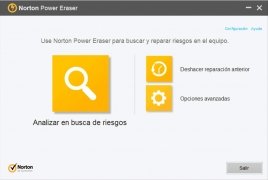 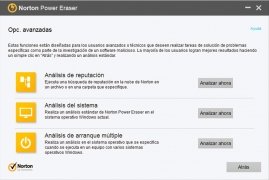 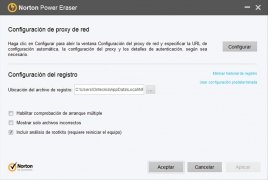 Norton Power Eraser is a tool that has been advertised as the last possible scan before formatting a computer due to a virus. This utility performs an in-depth scan of the hard drive in search of any element that may be malicious to eliminate it.

The general idea, is that you should never have to use Norton Power Eraser, but it is always possible that a virus manages to install itself on your computer and that it is impossible to eliminate. That is why, Norton Power Eraser manages to find them while it remains undetected, as it covers its antivirus status (something that many viruses try to search for and block). Thus, this is your last chance.

How Norton Power Eraser works is very simple, being an executable file, it includes a powerful scanner that detects and disinfects any virus, trojan, worm, scareware, rogueware and malware that it finds by force.

Its interface is very simple, it doesn't include anything to seem nicer to the user, just the precise buttons and options that you will need to manage to eliminate the viruses.