RAR is a tool that will allow you to extract compressed files, recover damaged documents and launch SFX files. Download RAR free for your Mac computer 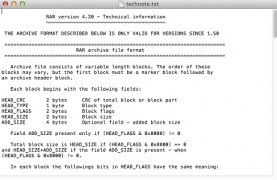 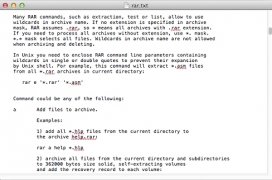 One of the most popular decompression tools for Windows is WinRAR. The company that created it, RARLAB, has developed RAR, the equivalent version for Mac.

Decompression tool for one of the most popular formats

RAR is a tool that allows users to extract contents from files with .rar extension, one of the most popular formats on the Internet. Despite not having a graphical interface, you'll only need to know a few simple commands to be able to decompress files. Furthermore, you'll also be able to launch SFX files and recover damaged documents.

Download RAR for Mac and get hold of the decompression tool compatible with one of the most popular formats.

WinRAR Portable (Unplugged) PC 3.9.1.1
Other languages
We use our own and third-party cookies for advertising, session, analytic, and social network purposes. Any action other than blocking them or the express request of the service associated to the cookie in question, involves providing your consent to their use. Check our Privacy Policy.