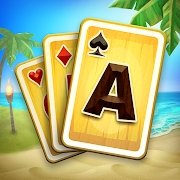 The person who has done the most in this world to popularize the game of solitaire cards is undoubtedly Microsoft, which has dynamited the productivity of many companies. But we'll talk about that another day, because this classic card game finds in Solitaire TriPeaks a renewed version with different rules from the more traditional versions.

As you know, in the solitaire you compose scales in the numbering order of the cards, alternating colors, stacking them according to their suit and all that. What we find in this version of the solitaire is a game where we will have to place the cards in numerical order, both ascending and descending, so that little by little they will release the upper part and thus be able to uncover all the cards.

The objective, obviously, is to finish with all the cards without getting blocked. That's why you're going to have to play with logic, although it's undeniable that luck is going to play an important role.

These are the main functions of the game: